The Fighting Ministers: A Film by David Soul

For decades the United States Steel Corporation had been the very heart of America’s productive power and wealth. The bedrock of American manufacturing and a vital part of her economy, U.S. Steel was also the largest employer in the U.S., if not the world. Generations of steel workers — fathers, sons, and grandsons — had shared in the prosperity their work had given them.

During World War II its furnaces and mills along the 40-mile length of the Monongahela River on the outskirts of Pittsburgh, PA, ran at full capacity, producing the steel that built the U.S. war machine. After the war and retooled for peacetime, U.S. Steel, along with a dozen other steel companies in the “Mon Valley,” provided the steel that built America’s bridges, buildings, railroads, and automobiles.

By the early 1980s, however, times were a‘changing’. Corporate profits and shareholder dividends took center stage as labour, shipping, and reinvestment costs continued to rise. In 1981, when 13,000 overworked members of the Professional Air Traffic Controllers Organization (PATCO), seeking shorter hours and higher wages, threatened to go on strike, President Ronald Reagan fired them. With this action, the President sowed the seed of a chain-reaction that impacted the whole of the union movement across the U.S., as well as across the Atlantic in Margaret Thatcher’s Great Britain.

While the U.S. turned to foreign suppliers for cheaper labour and imports, the U.S. Steel Corporation diversified, bought up Marathon Oil, and renamed itself the USX Corporation. Mellon Bank — Pittsburgh’s largest at the time — rather than investing steel worker pension funds into local steel, invested in Japan’s steel-makers, the Sumitomo Corporation. Outsourcing was the name of the game and Pittsburgh’s industrial-based economy, once the heart and soul of the middle class, turned to technology, service, and finance as the future.

What followed was the greatest economic shakedown in American history. Nine out of ten blast furnaces went cold. Unemployment shot up to 28% as 100,000 steel workers and a further 150,000 whose businesses depended on steel were put out of work. The river valley communities of Bradford, Alaquippa, Duquense, Clairton, Homestead, etc., communities whose existence for generations had depended on steel, went from boom to bust. Public services ceased while bankruptcies, foreclosures, divorces, and suicides sky-rocketed. The Monongahela River Valley was decimated.

A group of young pastors and their wives who served these communities and were witnessing the devastation caused in people’s lives, risked their own jobs and careers and with no guarantee of a successful outcome, took up the cause of the unemployed. They actively challenged the corporate decisions that had put the people out of work and in the streets and that were destroying local businesses, homes, and families.

This is their story. 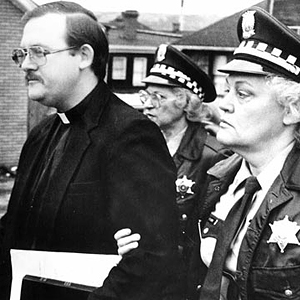 The producers gratefully acknowledge the cooperation of Pittsburgh Television Stations: WPXI-TV; KDKA-TV; WTAE-TV; The MacNeil/Lehrer Newshour and the men and women of the Monongahela and Ohio River Valleys; funding for this program was provided by The Catticus Corporation, a non-profit organisation; a Bill Jersey/David Soul Production.