Letters From the Grave 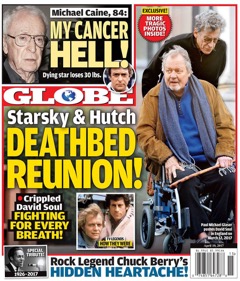 First I thought to myself, “Gee, that’s a pretty low blow; DEATHBED REUNION!… but, but, but…. I ain’t dead yet.” And then I thought, “My God, these lizards finally got something right! How did they do that? Fact is, I’m writing this email from my casket in Highgate Cemetery, among the worms, six-feet under. And Paul just threw the last shovel of dirt on the coffin.

So, thank you for your accuracy and a new appreciation and respect for the accuracy of your intrepid photographers and writers who saw the handwriting on the wall!

RE: THE S&H DEATHBED REUNION

What a splendid, moving ceremony the funeral was, with just the right amount of tears as I was lowered into the pit at Highgate Cemetery. I’m surprised none of your people tried to crash the funeral. But then, I guess it’s a case of out-of-sight, out-of-mind, huh?

By the way, did you know that Highgate Cemetery is also the final resting place for the likes of Karl Marx and George Michael? Didn’t realise what a famous hangout it was. Ran into Karl on my first day. He’s been down here since 1883 and starting to show it, but what a nice guy… often misunderstood, he feels. He gave me a copy of his book, The Book of Life, and urged me to read it in my spare time. Guy’s got a wicked sense of humour.

Things are going great since the GLOBE headline writers pronounced me on my ‘final legs’ and, guess what? There are no photographers — and fake news is banned! No paparazzi or stringers are allowed — except dead ones.

The later yet DAVID SOUL